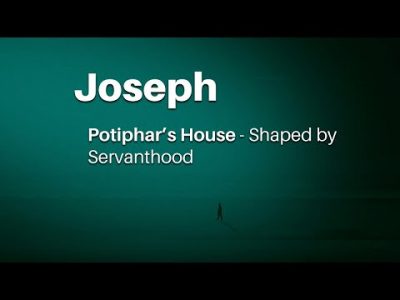 Genesis 39:1-6
39 Now Joseph had been taken down to Egypt. Potiphar, an Egyptian who was one of Pharaoh’s officials, the captain of the guard, bought him from the Ishmaelites who had taken him there.

2 The Lord was with Joseph so that he prospered, and he lived in the house of his Egyptian master. 3 When his master saw that the Lord was with him and that the Lord gave him success in everything he did, 4 Joseph found favor in his eyes and became his attendant. Potiphar put him in charge of his household, and he entrusted to his care everything he owned. 5 From the time he put him in charge of his household and of all that he owned, the Lord blessed the household of the Egyptian because of Joseph. The blessing of the Lord was on everything Potiphar had, both in the house and in the field. 6 So Potiphar left everything he had in Joseph’s care; with Joseph in charge, he did not concern himself with anything except the food he ate.

Mark 9:33-35
33 They came to Capernaum. When he was in the house, he asked them, “What were you arguing about on the road?” 34 But they kept quiet because on the way they had argued about who was the greatest.

35 Sitting down, Jesus called the Twelve and said, “Anyone who wants to be first must be the very last, and the servant of all.”