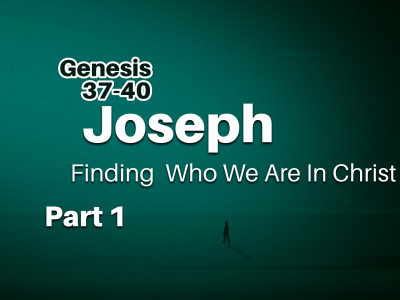 37 Jacob lived in the land where his father had stayed, the land of Canaan.

Joseph, a young man of seventeen, was tending the flocks with his brothers, the sons of Bilhah and the sons of Zilpah, his father’s wives, and he brought their father a bad report about them.

3 Now Israel loved Joseph more than any of his other sons, because he had been born to him in his old age; and he made an ornate robe for him. 4 When his brothers saw that their father loved him more than any of them, they hated him and could not speak a kind word to him.

5 Joseph had a dream, and when he told it to his brothers, they hated him all the more. 6 He said to them, “Listen to this dream I had: 7 We were binding sheaves of grain out in the field when suddenly my sheaf rose and stood upright, while your sheaves gathered around mine and bowed down to it.”

8 His brothers said to him, “Do you intend to reign over us? Will you actually rule us?” And they hated him all the more because of his dream and what he had said.

10 When he told his father as well as his brothers, his father rebuked him and said, “What is this dream you had? Will your mother and I and your brothers actually come and bow down to the ground before you?” 11 His brothers were jealous of him, but his father kept the matter in mind.