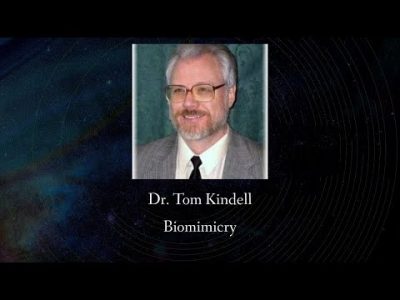 Dr. Tom Kindell Joins us today to present Part 4 of his Biomicry series on ingenious design in biology that man desires to copy to improve our own technology, often without giving acknowledgement to the original designer – God.

Dr. Thomas Kindell was once an ardent believer in the “fact” of evolution. However, through his exposure to the scientific case for creation, he became a zealous creationist. He has received advanced training in scientific creationism through the Graduate School of the Institute for Creation Research in Santee, California. He has been privileged to study under several of the world’s most prominent creationist scientists. He also has studied Christian Apologetics and Biblical-Scientific Creationism at California Graduate School of Theology where he received his M.A. in Biblical Studies. He holds a Doctorate in Philosophy of Theology (major in philosophy of Biblical apologetics.)

Dr. Kindell is the founder and president of Reasons for Faith Ministries, Inc., a non-profit ministry dedicated to equipping Christian believers to “give every man an answer” for their Biblical faith. He is an ordained minister with the Calvary Chapel of Weston, TX. For over 35 years he has engaged in a traveling teaching ministry lecturing on Biblical apologetics and the scientific case for creation.

He has also successfully debated the scientific case for creation against notable evolutionists on high school and college campuses, radio, and television. Dr. Kindell is a frequent guest on the radio series “Science, Scripture & Salvation” which is produced by the Institute for Creation Research.

Dr. Kindell’s creation‑science seminar has been repeatedly acclaimed as one of the very best in the nation and has been enthusiastically endorsed by Dr. Duane T. Gish, Senior Vice‑President Emeritus of the Institute for Creation Research.