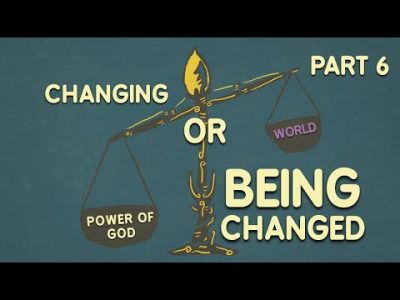 Romans 12:2 (ESV)
2 Do not be conformed to this world, but be transformed by the renewal of your mind, that by testing you may discern what is the will of God, what is good and acceptable and perfect.

1 Samuel 10:6
6 The Spirit of the Lord will come powerfully upon you…and you will be changed into a different person.

Luke 5:1-11
5 One day as Jesus was standing by the Lake of Gennesaret, the people were crowding around him and listening to the word of God. 2 He saw at the water’s edge two boats, left there by the fishermen, who were washing their nets. 3 He got into one of the boats, the one belonging to Simon, and asked him to put out a little from shore. Then he sat down and taught the people from the boat.

4 When he had finished speaking, he said to Simon, “Put out into deep water, and let down the nets for a catch.”

5 Simon answered, “Master, we’ve worked hard all night and haven’t caught anything. But because you say so, I will let down the nets.”

6 When they had done so, they caught such a large number of fish that their nets began to break. 7 So they signaled their partners in the other boat to come and help them, and they came and filled both boats so full that they began to sink.

8 When Simon Peter saw this, he fell at Jesus’ knees and said, “Go away from me, Lord; I am a sinful man!” 9 For he and all his companions were astonished at the catch of fish they had taken, 10 and so were James and John, the sons of Zebedee, Simon’s partners.

Then Jesus said to Simon, “Don’t be afraid; from now on you will fish for people.” 11 So they pulled their boats up on shore, left everything and followed him.

1 Samuel 3
3 The boy Samuel ministered before the Lord under Eli. In those days the word of the Lord was rare; there were not many visions.

2 One night Eli, whose eyes were becoming so weak that he could barely see, was lying down in his usual place. 3 The lamp of God had not yet gone out, and Samuel was lying down in the house of the Lord, where the ark of God was. 4 Then the Lord called Samuel.

But Eli said, “I did not call; go back and lie down.” So he went and lay down.

6 Again the Lord called, “Samuel!” And Samuel got up and went to Eli and said, “Here I am; you called me.”

7 Now Samuel did not yet know the Lord: The word of the Lord had not yet been revealed to him.

8 A third time the Lord called, “Samuel!” And Samuel got up and went to Eli and said, “Here I am; you called me.”

Then Eli realized that the Lord was calling the boy. 9 So Eli told Samuel, “Go and lie down, and if he calls you, say, ‘Speak, Lord, for your servant is listening.’” So Samuel went and lay down in his place.

10 The Lord came and stood there, calling as at the other times, “Samuel! Samuel!”

Then Samuel said, “Speak, for your servant is listening.”

11 And the Lord said to Samuel: “See, I am about to do something in Israel that will make the ears of everyone who hears about it tingle. 12 At that time I will carry out against Eli everything I spoke against his family—from beginning to end. 13 For I told him that I would judge his family forever because of the sin he knew about; his sons blasphemed God, and he failed to restrain them. 14 Therefore I swore to the house of Eli, ‘The guilt of Eli’s house will never be atoned for by sacrifice or offering.’”

15 Samuel lay down until morning and then opened the doors of the house of the Lord. He was afraid to tell Eli the vision, 16 but Eli called him and said, “Samuel, my son.”

Samuel answered, “Here I am.”

17 “What was it he said to you?” Eli asked. “Do not hide it from me. May God deal with you, be it ever so severely, if you hide from me anything he told you.” 18 So Samuel told him everything, hiding nothing from him. Then Eli said, “He is the Lord; let him do what is good in his eyes.”

19 The Lord was with Samuel as he grew up, and he let none of Samuel’s words fall to the ground. 20 And all Israel from Dan to Beersheba recognized that Samuel was attested as a prophet of the Lord. 21 The Lord continued to appear at Shiloh, and there he revealed himself to Samuel through his word.