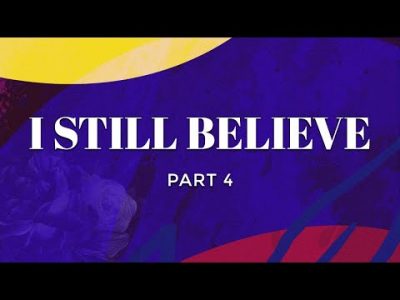 Luke 18:8 (NIV)
8 …I tell you, he will see that they get justice, and quickly. However, when the Son of Man comes, will he find faith on the earth?”

John 20:31 (NIV)
31 But these are written so that you may believe (and continue to believe) that Jesus is the Christ, the Son of God. Then, by believing, (continuing to believe) you may have life through his name.

John 3:14-16 (NIV)
14 Just as Moses lifted up the snake in the wilderness, so the Son of Man must be lifted up, 15 that everyone who believes (and continues to believe) may have eternal life in him.” 16 For God so loved the world that he gave his one and only Son, that whoever believes (and continues to believe) in him shall not perish but have eternal life.

Galatians 1:6 (NCV)
6 God, by his grace through Christ, called you to become his people. So I am amazed that you are turning away so quickly and believing something different than the Good News.

Luke 18:1
18 Then Jesus told his disciples a parable to show them that they should always pray and not give up.

1 John 5:14
14 This is the confidence we have in approaching God: that if we ask anything according to his will, he hears us.

John 11:41-42
41 So they took away the stone. Then Jesus looked up and said, “Father, I thank you that you have heard me. 42 I knew that you always hear me, but I said this for the benefit of the people standing here, that they may believe that you sent me.”

Isaiah 65:24
24 Before they call I will answer; while they are still speaking I will hear.

Isaiah 40:31 (ESV)
31 but they who wait for the Lord shall renew their strength;

Jeremiah 29:13
13 You will seek me and find me when you seek me with all your heart.

Isaiah 53:4-5
4 Surely he took up our pain and bore our suffering, yet we considered him punished by God, stricken by him, and afflicted. 5 But he was pierced for our transgressions, he was crushed for our iniquities; the punishment that brought us peace was on him, and by his wounds we are healed.

Matthew 8:14-17
14 When Jesus came into Peter’s house, he saw Peter’s mother-in-law lying in bed with a fever. 15 He touched her hand and the fever left her, and she got up and began to wait on him.

16 When evening came, many who were demon-possessed were brought to him, and he drove out the spirits with a word and healed all the sick. 17 This was to fulfill what was spoken through the prophet Isaiah: “He took up our infirmities and bore our diseases.”

James 5:14-16
14 Is anyone among you sick? Let them call the elders of the church to pray over them and anoint them with oil in the name of the Lord. 15 And the prayer offered in faith will make the sick person well; the Lord will raise them up. If they have sinned, they will be forgiven. 16 Therefore confess your sins to each other and pray for each other so that you may be healed. The prayer of a righteous person is powerful and effective.

Mark 5:21-36
21 When Jesus had again crossed over by boat to the other side of the lake, a large crowd gathered around him while he was by the lake. 22 Then one of the synagogue leaders, named Jairus, came, and when he saw Jesus, he fell at his feet. 23 He pleaded earnestly with him, “My little daughter is dying. Please come and put your hands on her so that she will be healed (He believed that Jesus could heal his daughter) and live.” 24 So Jesus went with him.

A large crowd followed and pressed around him. 25 And a woman was there who had been subject to bleeding for twelve years. 26 She had suffered a great deal under the care of many doctors and had spent all she had, yet instead of getting better she grew worse. 27 When she heard about Jesus (She believed Jesus could heal her), she came up behind him in the crowd and touched his cloak, 28 because she thought, “If I just touch his clothes, I will be healed.” (she pressed in – or kept believing – despite the things threatening to kill her faith.  Often when we begin to believe God for healing, we find things blocking our way.  The question is will we pressed forward in belief) 29 Immediately her bleeding stopped and she felt in her body that she was freed from her suffering.

30 At once Jesus realized that power had gone out from him. He turned around in the crowd and asked, “Who touched my clothes?”

31 “You see the people crowding against you,” his disciples answered, “and yet you can ask, ‘Who touched me?’ ”

32 But Jesus kept looking around to see who had done it. 33 Then the woman, knowing what had happened to her, came and fell at his feet and, trembling with fear, told him the whole truth. 34 He said to her, “Daughter, your faith has healed you. Go in peace and be freed from your suffering.”

35 While Jesus was still speaking, some people came from the house of Jairus, the synagogue leader “Your daughter is dead,” they said. “Why bother the teacher anymore?”