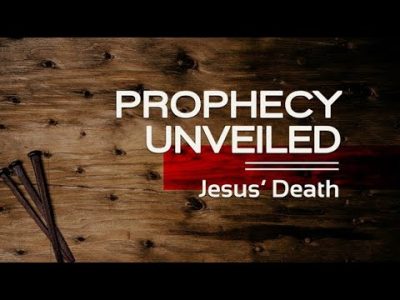 The Crucifixion of Jesus

So the soldiers took charge of Jesus. 17 Carrying his own cross, he went out to the place of the Skull (which in Aramaic is called Golgotha). 18 There they crucified him, and with him two others—one on each side and Jesus in the middle.

19 Pilate had a notice prepared and fastened to the cross. It read: jesus of nazareth, the king of the jews. 20 Many of the Jews read this sign, for the place where Jesus was crucified was near the city, and the sign was written in Aramaic, Latin and Greek. 21 The chief priests of the Jews protested to Pilate, “Do not write ‘The King of the Jews,’ but that this man claimed to be king of the Jews.”

23 When the soldiers crucified Jesus, they took his clothes, dividing them into four shares, one for each of them, with the undergarment remaining. This garment was seamless, woven in one piece from top to bottom.

This happened that the scripture might be fulfilled that said, “They divided my clothes among them and cast lots for my garment.” So this is what the soldiers did.

The Death of Jesus

28 Later, knowing that everything had now been finished, and so that Scripture would be fulfilled, Jesus said, “I am thirsty.” 29 A jar of wine vinegar was there, so they soaked a sponge in it, put the sponge on a stalk of the hyssop plant, and lifted it to Jesus’ lips.

30 When he had received the drink, Jesus said, “It is finished.” With that, he bowed his head and gave up his spirit.

31 Now it was the day of Preparation, and the next day was to be a special Sabbath. Because the Jewish leaders did not want the bodies left on the crosses during the Sabbath, they asked Pilate to have the legs broken and the bodies taken down. 32 The soldiers therefore came and broke the legs of the first man who had been crucified with Jesus, and then those of the other. 33 But when they came to Jesus and found that he was already dead, they did not break his legs. 34 Instead, one of the soldiers pierced Jesus’ side with a spear, bringing a sudden flow of blood and water. 35 The man who saw it has given testimony, and his testimony is true. He knows that he tells the truth, and he testifies so that you also may believe. 36 These things happened so that the scripture would be fulfilled: “Not one of his bones will be broken,” 37 and, as another scripture says, “They will look on the one they have pierced.”

In this section of John Chapter 19 he focuses his attention on the events of the Crucifixion.  Specifically he relates it to the fulfilment of many Old Testament Prophecies readily known to those of his day.  In doing so he presents an undeniable weight of evidence that Jesus, the promised Messiah, is the fulfillment of those prophecies and that this evidence alone should be more than enough for us to believe.

“But these have been written that you may believe that Jesus is the Christ, the Son of God; and that believing you may have life in His name” ( John 20:31)

“But all this has taken place that the Scriptures of the prophets may be fulfilled” (Matt. 26:56).

…And He said to them, “O foolish men and slow of heart to believe in all that the prophets have spoken! Was it not necessary for the Christ to suffer these things and to enter into His glory?” And beginning with Moses and with all the prophets, He explained to them the things concerning Himself in all the Scriptures. (Luke 24:25-27).

Now He said to them, “These are My words which I spoke to you while I was still with you, that all things which are written about Me in the Law of Moses and the Prophets and the Psalms must be fulfilled” (Luke 24:44).