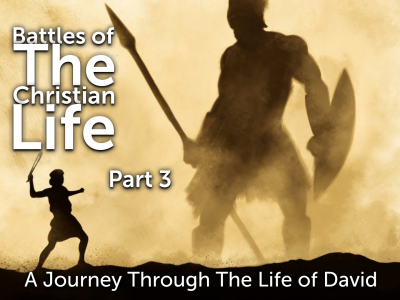 After removing Saul, he made David their king. God testified concerning him: ‘I have found David son of Jesse, a man after my own heart; he will do everything I want him to do.’

But you, man of God, flee from all this, and pursue righteousness, godliness, faith, love, endurance and gentleness. Fight the good fight of the faith. Take hold of the eternal life to which you were called when you made your good confession in the presence of many witnesses.

I have fought the good fight, I have finished the race, I have kept the faith. Now there is in store for me the crown of righteousness, which the Lord, the righteous Judge, will award to me on that day —and not only to me, but also to all who have longed for his appearing.

22 David sang to the Lord the words of this song when the Lord delivered him from the hand of all his enemies and from the hand of Saul. 2 He said: “The Lord is my rock, my fortress and my deliverer; 3my God is my rock, in whom I take refuge, my shield and the horn of my salvation. He is my stronghold, my refuge and my savior—from violent people you save me. 4 “I called to the Lord, who is worthy of praise, and have been saved from my enemies.

17 “He reached down from on high and took hold of me; he drew me out of deep waters. 18 He rescued me from my powerful enemy, from my foes, who were too strong for me.

19 They confronted me in the day of my disaster, but the Lord was my support. 20 He brought me out into a spacious place; he rescued me because he delighted in me.

22 For I have kept the ways of the Lord; I am not guilty of turning from my God. 23 All his laws are before me; I have not turned away from his decrees.

29 You, Lord, are my lamp; the Lord turns my darkness into light.

31 “As for God, his way is perfect: The Lord’s word is flawless; he shields all who take refuge in him.  32 For who is God besides the Lord? And who is the Rock except our God?

33 It is God who arms me with strength and keeps my way secure.

47 “The Lord lives! Praise be to my Rock! Exalted be my God, the Rock, my Savior!

51 “He gives his king great victories; he shows unfailing kindness to his anointed, to David and his descendants forever.”