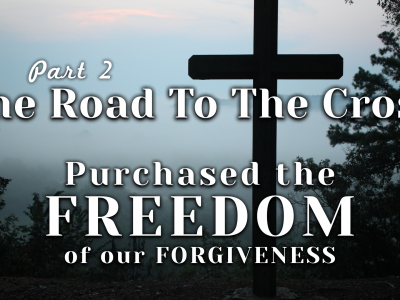 32 Two other men, both criminals, were also led out with him to be executed. 33 When they came to the place called the Skull, they crucified him there, along with the criminals—one on his right, the other on his left. 34 Jesus said, “Father, forgive them, for they do not know what they are doing.” And they divided up his clothes by casting lots.

35 The people stood watching, and the rulers even sneered at him. They said, “He saved others; let him save himself if he is God’s Messiah, the Chosen One.”

36 The soldiers also came up and mocked him. They offered him wine vinegar 37 and said, “If you are the king of the Jews, save yourself.”

38 There was a written notice above him, which read: this is the king of the jews.

39 One of the criminals who hung there hurled insults at him: “Aren’t you the Messiah? Save yourself and us!”

40 But the other criminal rebuked him. “Don’t you fear God,” he said, “since you are under the same sentence? 41 We are punished justly, for we are getting what our deeds deserve. But this man has done nothing wrong.”

42 Then he said, “Jesus, remember me when you come into your kingdom.”

43 Jesus answered him, “Truly I tell you, today you will be with me in paradise.”

1 Praise the Lord, my soul; all my inmost being, praise his holy name. 2 Praise the Lord, my soul, and forget not all his benefits— 3 who forgives all your sins and heals all your diseases, 4 who redeems your life from the pit and crowns you with love and compassion, 5 who satisfies your desires with good things so that your youth is renewed like the eagle’s. 6 The Lord works righteousness and justice for all the oppressed. 7 He made known his ways to Moses, his deeds to the people of Israel: 8 The Lord is compassionate and gracious, slow to anger, abounding in love. 9 He will not always accuse, nor will he harbor his anger forever; 10 he does not treat us as our sins deserve or repay us according to our iniquities. 11 For as high as the heavens are above the earth, so great is his love for those who fear him;

12 as far as the east is from the west, so far has he removed our transgressions from us. 13 As a father has compassion on his children, so the Lord has compassion on those who fear him; 14 for he knows how we are formed, he remembers that we are dust.

8 If we claim to be without sin, we deceive ourselves and the truth is not in us. 9 If we confess our sins, he is faithful and just and will forgive us our sins and purify us from all unrighteousness.

18 Look on my affliction and my distress and take away all my sins.

34 …“For I will forgive their wickedness and will remember their sins no more.”

10 he does not treat us as our sins deserve or repay us according to our iniquities. 11 For as high as the heavens are above the earth, so great is his love for those who fear him;12 as far as the east is from the west, so far has he removed our transgressions from us.

5 Then the Lord came down in the cloud and stood there with him and proclaimed his name, the Lord. 6 And he passed in front of Moses, proclaiming, “The Lord, the Lord, the compassionate and gracious God, slow to anger, abounding in love and faithfulness, 7 maintaining love to thousands, and forgiving wickedness, rebellion and sin. Yet he does not leave the guilty unpunished; he punishes the children and their children for the sin of the parents to the third and fourth generation.”

12 And forgive us our debts, as we also have forgiven our debtors.

21 Then Peter came to Jesus and asked, “Lord, how many times shall I forgive my brother or sister who sins against me? Up to seven times?”

22 Jesus answered, “I tell you, not seven times, but seventy-seven times.[a]

23 “Therefore, the kingdom of heaven is like a king who wanted to settle accounts with his servants. 24 As he began the settlement, a man who owed him ten thousand bags of gold was brought to him. 25 Since he was not able to pay, the master ordered that he and his wife and his children and all that he had be sold to repay the debt.

26 “At this the servant fell on his knees before him. ‘Be patient with me,’ he begged, ‘and I will pay back everything.’ 27 The servant’s master took pity on him, canceled the debt and let him go.

28 “But when that servant went out, he found one of his fellow servants who owed him a hundred silver coins. He grabbed him and began to choke him. ‘Pay back what you owe me!’ he demanded.

29 “His fellow servant fell to his knees and begged him, ‘Be patient with me, and I will pay it back.’

30 “But he refused. Instead, he went off and had the man thrown into prison until he could pay the debt. 31 When the other servants saw what had happened, they were outraged and went and told their master everything that had happened.

32 “Then the master called the servant in. ‘You wicked servant,’ he said, ‘I canceled all that debt of yours because you begged me to. 33 Shouldn’t you have had mercy on your fellow servant just as I had on you?’ 34 In anger his master handed him over to the jailers to be tortured, until he should pay back all he owed.

35 “This is how my heavenly Father will treat each of you unless you forgive your brother or sister from your heart.”