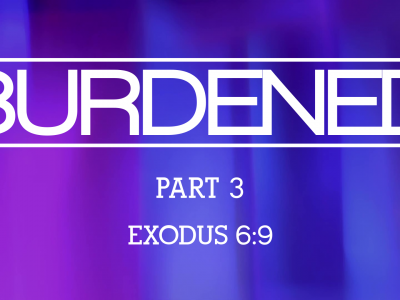 28 “Come to me, all you who are weary and burdened, and I will give you rest. 29 Take my yoke upon you and learn from me, for I am gentle and humble in heart, and you will find rest for your souls. 30 For my yoke is easy and my burden is light.”

7 The Lord said, “I have indeed seen the misery of my people in Egypt. I have heard them crying out because of their slave drivers, and I am concerned about their suffering. 8 So I have come down to rescue them from the hand of the Egyptians and to bring them up out of that land into a good and spacious land, a land flowing with milk and honey—the home of the Canaanites, Hittites, Amorites, Perizzites, Hivites and Jebusites. 9 And now the cry of the Israelites has reached me, and I have seen the way the Egyptians are oppressing them. 10 So now, go. I am sending you to Pharaoh to bring my people the Israelites out of Egypt.”

16 “Go, assemble the elders of Israel and say to them, ‘The Lord, the God of your fathers—the God of Abraham, Isaac and Jacob—appeared to me and said: I have watched over you and have seen what has been done to you in Egypt. 17 And I have promised to bring you up out of your misery in Egypt into the land of the Canaanites, Hittites, Amorites, Perizzites, Hivites and Jebusites—a land flowing with milk and honey.’

29 Moses and Aaron brought together all the elders of the Israelites, 30 and Aaron told them everything the Lord had said to Moses. He also performed the signs before the people, 31 and they believed. And when they heard that the Lord was concerned about them and had seen their misery, they bowed down and worshiped.

6 That same day Pharaoh gave this order to the slave drivers and overseers in charge of the people: 7 “You are no longer to supply the people with straw for making bricks; let them go and gather their own straw. 8 But require them to make the same number of bricks as before; don’t reduce the quota. They are lazy; that is why they are crying out, ‘Let us go and sacrifice to our God.’ 9 Make the work harder for the people so that they keep working and pay no attention to lies.”

2 God also said to Moses, “I am the Lord. 3 I appeared to Abraham, to Isaac and to Jacob as God Almighty, but by my name the Lord I did not make myself fully known to them. 4 I also established my covenant with them to give them the land of Canaan, where they resided as foreigners. 5 Moreover, I have heard the groaning of the Israelites, whom the Egyptians are enslaving, and I have remembered my covenant.

9 Moses reported this to the Israelites, but they did not listen to him because of their discouragement and harsh labor.

3 Therefore, holy brothers and sisters, who share in the heavenly calling, fix your thoughts on Jesus, whom we acknowledge as our apostle and high priest.

7 So, as the Holy Spirit says:

“Today, if you hear his voice,

as you did in the rebellion,

during the time of testing in the wilderness,

9 where your ancestors tested and tried me,

though for forty years they saw what I did.

10 That is why I was angry with that generation;

I said, ‘Their hearts are always going astray,

and they have not known my ways.’

11 So I declared on oath in my anger,

‘They shall never enter my rest.’ ”

12 See to it, brothers and sisters, that none of you has a sinful, unbelieving heart that turns away from the living God. 13 But encourage one another daily, as long as it is called “Today,” so that none of you may be hardened by sin’s deceitfulness. 14 We have come to share in Christ, if indeed we hold our original conviction firmly to the very end. 15 As has just been said:

“Today, if you hear his voice,

do not harden your hearts

as you did in the rebellion.”

16 Who were they who heard and rebelled? Were they not all those Moses led out of Egypt? 17 And with whom was he angry for forty years? Was it not with those who sinned, whose bodies perished in the wilderness? 18 And to whom did God swear that they would never enter his rest if not to those who disobeyed? 19 So we see that they were not able to enter, because of their unbelief.

10 For I do not want you to be ignorant of the fact, brothers and sisters, that our ancestors were all under the cloud and that they all passed through the sea. 2 They were all baptized into Moses in the cloud and in the sea. 3 They all ate the same spiritual food 4 and drank the same spiritual drink; for they drank from the spiritual rock that accompanied them, and that rock was Christ. 5 Nevertheless, God was not pleased with most of them; their bodies were scattered in the wilderness.

11 These things happened to them as examples and were written down as warnings for us, on whom the culmination of the ages has come. 12 So, if you think you are standing firm, be careful that you don’t fall! 13 No temptation has overtaken you except what is common to mankind. And God is faithful; he will not let you be tempted beyond what you can bear. But when you are tempted, he will also provide a way out so that you can endure it.

3 A bruised reed he will not break, and a smoldering wick he will not snuff out. In faithfulness he will bring forth justice;

8 I know your deeds. See, I have placed before you an open door that no one can shut. I know that you have little strength, yet you have kept my word and have not denied my name.

17 …a broken and contrite heart, O God, you will not despise.