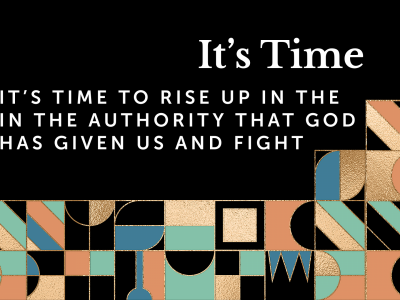 NOTE:  Due to technical difficulties the recording to this message is not available

Before we dig deeper into this thought, I want to set the stage by expanding on three main parts of my statement

Esther and Mordecai refused to just accept their fate and die. Here in this chapter we see the bold declaration of their identity and their plan. They could have chosen to stay silent. Instead they rose up and dared to oppose the edict that had been put in place.

As Christians, we often falsely assume that we should just be meek and quiet. That it is wrong to take a stand in bold opposition. But it is not. In fact, God wants us to

2. AUTHORITY – The power that God has given unto us in this world

Matthew 28:18-19 New International Version (NIV)
18 Then Jesus came to them and said, “All authority in heaven and on earth has been given to me. 19 Therefore go and make disciples of all nations, baptizing them in the name of the Father and of the Son and of the Holy Spirit,

Luke 10:19-20 New International Version (NIV)
19 I have given you authority to trample on snakes and scorpions and to overcome all the power of the enemy; nothing will harm you. 20 However, do not rejoice that the spirits submit to you, but rejoice that your names are written in heaven.”

3. FIGHT – To do something, to engage the enemy

I am not suggesting we pick up weapons and begin killing those with whom we disagree. But I am saying that it is important we do something to take a stand against the lies, plans and destruction of the enemy in our world

Jude 3 New International Version (NIV)
3 Dear friends, although I was very eager to write to you about the salvation we share, I felt compelled to write and urge you to contend for the faith that was once for all entrusted to God’s holy people.

First and foremost, we must realize that the battles we fight have their origins in the spiritual realms.

Ephesians 6:12 New International Version (NIV)
12 For our struggle is not against flesh and blood, but against the rulers, against the authorities, against the powers of this dark world and against the spiritual forces of evil in the heavenly realms.

Daniel got a glimpse of this spiritual warfare…

Daniel 10:12-14 New International Version (NIV)
12 Then he continued, “Do not be afraid, Daniel. Since the first day that you set your mind to gain understanding and to humble yourself before your God, your words were heard, and I have come in response to them. 13 But the prince of the Persian kingdom resisted me twenty-one days. Then Michael, one of the chief princes, came to help me, because I was detained there with the king of Persia. 14 Now I have come to explain to you what will happen to your people in the future, for the vision concerns a time yet to come.”

that have REAL LIFE consequences…

“Our culture is experiencing a hostile takeover. We must stop rejecting God if we ever want it to end” – Sam Sorbo

Abortion, Homosexuality, Godlessness, Violence, Drug Abuse, Sexual Promiscuity, Sickness, Death, Terrorism, Suicide, No Morality, Divorce, Attack against Christianity – all of these and so much more are the REAL LIFE casualties of Spiritual Battles lost

2 Corinthians 10:4-5 English Standard Version (ESV)
4 For the weapons of our warfare are not of the flesh but have divine power to destroy strongholds. 5 We destroy arguments and every lofty opinion raised against the knowledge of God, and take every thought captive to obey Christ,

Ephesians 6:10-18 English Standard Version (ESV)
The Whole Armor of God
10 Finally, be strong in the Lord and in the strength of his might. 11 Put on the whole armor of God, that you may be able to stand against the schemes of the devil. 12 For we do not wrestle against flesh and blood, but against the rulers, against the authorities, against the cosmic powers over this present darkness, against the spiritual forces of evil in the heavenly places. 13 Therefore take up the whole armor of God, that you may be able to withstand in the evil day, and having done all, to stand firm. 14 Stand therefore, having fastened on the belt of truth, and having put on the breastplate of righteousness, 15 and, as shoes for your feet, having put on the readiness given by the gospel of peace. 16 In all circumstances take up the shield of faith, with which you can extinguish all the flaming darts of the evil one; 17 and take the helmet of salvation, and the sword of the Spirit, which is the word of God, 18 praying at all times in the Spirit, with all prayer and supplication. To that end, keep alert with all perseverance, making supplication for all the saints,

that have REAL LIFE applications.

• Breastplate of Righteousness – the power of our testimony is determined by the righteousness of our lifestyle.

• Shoes of the readiness given by the Gospel of Peace – battles are won as we point people to the peace they can have with God through the good news of Jesus Christ.

• Shield of Faith – our protection in the battle against the fear, doubt and lies of the devil

• Helmet of Salvation – our identity and protection in Jesus Christ. Evangelism decimates the ranks of the enemy. The more people we lead to Jesus the less soldiers the enemy has

Matthew 16:15-19 English Standard Version (ESV)
15 He said to them, “But who do you say that I am?” 16 Simon Peter replied, “You are the Christ, the Son of the living God.” 17 And Jesus answered him, “Blessed are you, Simon Bar-Jonah! For flesh and blood has not revealed this to you, but my Father who is in heaven. 18 And I tell you, you are Peter, and on this rock[a] I will build my church, and the gates of hell[b] shall not prevail against it. 19 I will give you the keys of the kingdom of heaven, and whatever you bind on earth shall be bound in heaven, and whatever you loose on earth shall be loosed[c] in heaven.”

Love is the weapon that God chose to defeat the enemy once and for all. Love is a weapon that he wants us to use as well.

Hebrews 4:12 English Standard Version (ESV)
12 For the word of God is living and active, sharper than any two-edged sword, piercing to the division of soul and of spirit, of joints and of marrow, and discerning the thoughts and intentions of the heart.

Acts 1:8 New International Version (NIV)
8But you will receive power when the Holy Spirit comes on you; and you will be my witnesses in Jerusalem, and in all Judea and Samaria, and to the ends of the earth.”